The most recent episode of Fieldstone Common featuring Lucianne Lavin discussing her book Connecticut’s Indigenous Peoples: What Archeology, History, and Oral Traditions Teach Us About Their Communities and Their Cultures is now available as a podcast.

Here are some items that were mentioned during the 1 August 2013 Fieldstone Common interview with Lucianne Lavin about her book Connecticut’s Indigenous Peoples: What Archeology, History, and Oral Traditions Teach Us About Their Communities and Their Cultures.

You can learn more about Lucianne Lavin and her work at the Institute for American Indian Studies Museum and Research Center website. The museum is located in Washington, Connecticut and is open to visitors. It also has many exhibits and educational programs.

Lucianne recommends that anyone interested in archaeology learn about standard methodology and techniques. One suggestion would be to get involved with your state archaeology office.  If you are located in Connecticut you can check out the Connecticut Office of State Archaeology.

Also, check local community colleges for archaeology programs. The Norwalk Community College in Norwalk, Connecticut has a certificate program in archaeology as an avocation.

Yale University Press, the publisher of Connecticut’s Indigenous Peoples: What Archeology, History, and Oral Traditions Teach Us About Their Communities and Their Cultures, donated two copies of the book which were provided as giveaways during the live show to listeners in New York and Rhode Island. A big thank you to the Yale University Press for their generosity. 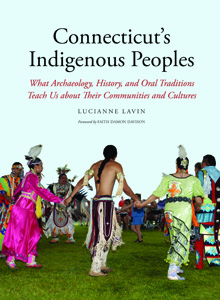 This week on Fieldstone Common, Marian Pierre-Louis interviews Lucianne Lavin, author of Connecticut’s Indigenous Peoples: What Archeology, History, and Oral Traditions Teach Us About Their Communities and Their Cultures.

More than 10,000 years ago, people settled on lands that now lie within the boundaries of the state of Connecticut. Leaving no written records and scarce archaeological remains, these peoples and their communities have remained unknown to all but a few archaeologists and other scholars. This pioneering book is the first to provide a full account of Connecticut’s indigenous peoples, from the long-ago days of their arrival to the present day. 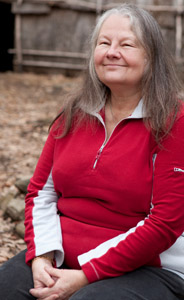 interviews with Native Americans, rare documents including periodicals, archaeological reports, master’s theses and doctoral dissertations, conference papers, newspapers, and government records, as well as her own ongoing archaeological and documentary research. She creates a fascinating and remarkably detailed portrait of indigenous peoples in deep historic times before European contact and of their changing lives during the past 400 years of colonial and state history. This book brings to light the richness and diversity of Connecticut’s indigenous histories, corrects misinformation about the vanishing Connecticut Indian, and reveals the significant roles and contributions of Native Americans to modern-day Connecticut.

Lucianne Lavin is Director of Research and Collections at the Institute for American Indian Studies, a research museum and educational center in Washington, CT. She received her M.A. and Ph.D. in anthropology from New York University. She is an archaeologist who has over 30 years of research and field experience in Northeastern archaeology and anthropology. Dr. Lavin has written over 100 professional publications and technical reports on the archaeology and ethnohistory of the Northeast.