The most recent episode of Fieldstone Common featuring Andrew Carroll discussing her book Here is Where: Discovering America’s Great Forgotten History is now available as a podcast.

Here are some items that were mentioned during the11 July 2013 Fieldstone Common interview with Andrew Carroll about his book Here is Where: Discovering America’s Great Forgotten History.

Here is Where: Discovering America’s Great Forgotten History, published by Crown Archetype, is available for purchase from Amazon.com and other booksellers.

You can learn more about Andrew Carroll and provide suggestions for future forgotten history sites at his website.

In addition to Here is Where, Andrew Carroll has published the following books: 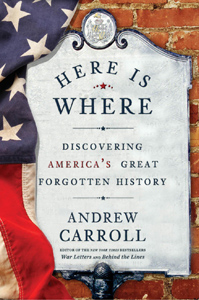 Here is Where chronicles Andrew Carroll’s journey across America to discover important but forgotten history. You’ll be amazed at the significant happenings and accomplished individuals that you’ve likely never heard of before.

Crown Archetype, the publisher of Here is Where: Discovering America’s Great Forgotten History, donated two copies of the book which were provided as giveaways during the live show to listeners in Texas and California. A big thank you to the Crown Archetype for their generosity!

Here Is Where chronicles Andrew Carroll’s eye-opening – and at times hilarious — journey across America to find and explore unmarked historic sites where extraordinary moments occurred and remarkable individuals once lived. Sparking the idea for this book was Carroll’s visit to the spot where Abraham Lincoln’s son was saved by the brother of Lincoln’s assassin. Carroll wondered, How many other unmarked places are there where intriguing events have unfolded and that we walk past every day, not realizing their significance? To answer that question, Carroll ultimately trekked to every region of the country — by car, train, plane, helicopter, bus, bike, and kayak and on foot. Among the things he learned:

* Where America’s deadliest maritime disaster took place, a calamity worse than the fate of the Titanic 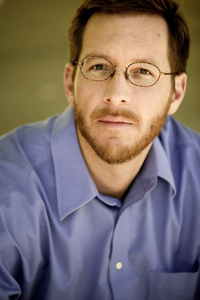 Here Is Where is thoroughly entertaining, but it’s also a profound reminder that the places we pass by often harbor amazing secrets and that there are countless other astonishing stories still out there, waiting to be found.

Andrew Carroll is the editor of several New York Times bestsellers, including Letters of a Nation, Behind the Lines, and War Letters, which inspired an acclaimed PBS documentary. Carroll’s book Operation Homecoming was the inspiration for an Oscar-nominated and Emmy-winning film.