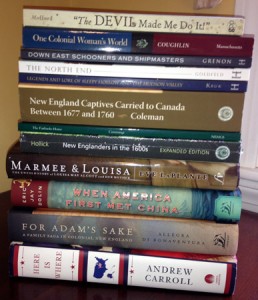 During the 1st Anniversary Celebration on August 29th we’ll be giving away 12 books during the one hour episode. Four of the books will be given away to the live audience and eight of the books will go to members of the Fieldstone Common E-Mail list.

You must be signed up for the E-Mail List prior to the episode to qualify to win!

Here are the 12 books we’ll be giving away:

New Englanders in the 1600s by Martin Hollick

The Devil Made Me Do It! by Juliet Haines Mofford

Down East Schooners and Shipmasters by Ingrid Grenon

The North End by Alex Goldfeld

Here is Where by Andrew Carroll